Bicycle Fine Art is pleased to present the following selected works by artist Neal Perbix. Creating pieces with materials most commonly found in construction sites, Neal experiments with his chosen media, remarking the experiences of daily life and reevaluating their use and function.

Repurposing materials from construction, Neal’s work can have a feeling of industry while also appealing to traditional graphic design, evoking an abstract playfulness distinct in today’s contemporary art. In his pieces Untitled #3 and Untitled #4, Neal creates the straight lines that are prominently featured on the canvas, by using a snap line, a chalk-based tool used to demarcate when snapped against a surface. Neal remarks that “most of my art making plays heavily on chance,” not being too attached to a fixed outcome. While the application of color seems deliberate, with this series Neal shares that he “sets [himself] up to create certain unknowns or outcomes during the process.” At first glance, the contrast of the vertical black and red lines against the stark white background command the viewer’s attention, while the subtle hues of pink and yellow draw a circular form that begins to emerge as the central focus of the piece. With his constant experimentation, Neal relates, “There are always new processes to be discovered.” His reliance on chance requires him to recognize color combinations that aren’t as strong and oftentimes being open to the possibility of re-stretching a new canvas and trying again. Neal remarks to Bicycle Fine Art, “This is how I’m able to stay engaged in art making.”

Though he mainly uses the same materials, Neal merges varying mediums together further adding depth to his process. By using tape, snap lines, and acrylic paint, Neal develops multiple layers by repurposing construction materials and reorienting them into a new purpose. Neal notes that “their initial use and method is designed/geared toward some type of precision or perfection,” which he continues to use in his works. Rather than stray completely from the precise qualities of his materials, Neal uses these properties to his advantage, creating clean, geometric designs. While there is some rigidity in the straightness of his compositions, Neal also achieves an element of playfulness through his experimentation that balances the “deadpan/literal outcome” of his meticulous designs. 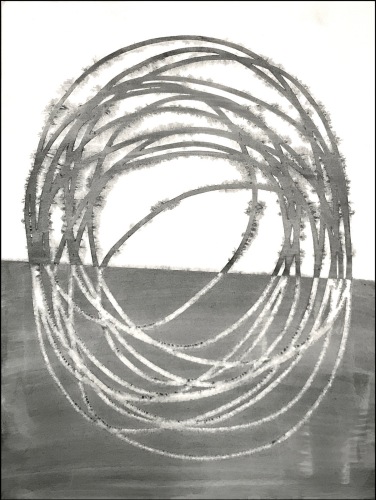 A work that demonstrates Neal’s playful attitude toward process is his newer work Both And. The title is a nod, as described by the artist, to the “either-or composition of the piece.” This composition shares many similar methods and materials with his earlier acrylic and tape drawings; what separates Both And from his other works on canvas is the use of graphite powder. Neal notes that he enjoys this new medium because “it’s basically a pencil…that you can paint with.” Known for his precise lines and clean edges, Neal shares, “I tried too hard to make sure the tape used made a good seal so it would prevent bleed lines.” However, while experimenting with graphite powder, Neal discovered that despite his best efforts the lines “bled once I added the graphite to the canvas. No amount of sealing the tape or adding pressure to the material would affect the outcome. After I pulled the tape up and saw them, they became my favorite part of the works.” These new pieces in a looser medium by Bicycle Fine Art artist Neal Perbix show him moving in an exciting direction which he exclaims is “game-changing,” revealing this work as a compelling example of what’s to come.

To view more works by Neal, visit our InCollect page as well as stop by the Profiles showroom on the 12th floor in the New York Design Center at 200 Lexington Ave.