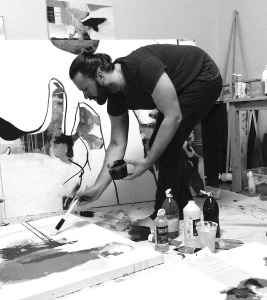 Bicycle Fine Art is thrilled to begin working with Massachusetts artist, Matthew Bielen and introduce his work to New York City. Matthew’s paintings are as imaginative as they are organic, finding a beautiful play between colors found in nature and “man-made” creations. The works evoke Matthew’s love of turbulent seas, wild coastlines, and moody weather, but they also illustrate a human role in these settings; perhaps even his own place in these landscapes, drawing comparisons between his personal life and his practice. We met with Matthew to discuss his paintings with him, how he is experimenting today with his process, the path that led him to this practice, and where he draws his inspiration.

Matthew works with acrylic paint, pouring it on his canvas fluidly into puddles. The high viscosity of the paint creates full pools of color, that he adds to every day after each layer has dried. He works on more than one painting at a time, tending each one as he surveys which canvases are reaching the end of the pouring cycle. Only then does he bring in his brush, applying white paint to the areas he wishes to “edit out.” While pooling paint is a well-practiced medium, Matthew likes to explore ways that he can uniquely alter the course of the work. Speaking of his practice, he says, “I wanted to take it a step further, covering the puddles, cutting them in half or starting them over.”

Matthew likes the beach best in the rain. Growing up, he and his family used to vacation at Hampton Beach, along the coast of New Hampshire, but it wasn’t until he visited Cape Cod in 2003 that he discovered a secret longing for more rugged terrains. In Cape Cod the water was cold. These weren’t the glamorous or sunny vistas of LA; they had character, and a real, hearty climate. The weather didn’t always allow for swimming, or picnicking, or a lot of human interference. As a way to spend more family time together, after the passing of Matthew’s mother when Matthew was seventeen, his aunt rented a summer cottage in Truro. The idyllic town was originally a central port for fishing, whaling and shipbuilding and the site of the first lighthouse, Highland Light, in Cape Cod. As Matthew and his cousins grew older and his family stopped renting the house, Matthew continued to visit every year on his own.

As he matured, the relationship between the natural world and the human one began to play out in his work. In his paintings, Matthew notes, “I use a range of colors that may be seen every day at the beach or perhaps only seasonally, depending on weather or other meteorological events. A mixture of ultramarine blue and white can easily remind me of most any day on the beach during any season, whereas when this same blue is placed next to a fiery red-orange, I can honestly feel the warmth that only a summer sunset over Cape Cod Bay can give you.” It was in Cape Cod that he developed his love for the wildness of the beach, and what it looked like without real estate corrupting it. He explores the symbiotic relationship in his pieces, showing what he calls the “non-organic forms mixing with organic forms.” He doesn’t try to hide his “non-organic” manipulations of the pooling paint. You can see the lines and cuts Matthew has made to the canvas. Matthew notes, “often, these rhythmic, organic colors become punctuated when I inject a very heavy-handed, man-made, shape using white or fluorescent paint. This aesthetic power struggle brings to mind the relationship between man and nature.” Matthew’s love for Cape Cod is even rooted in the history of the area. His readings about the coast guards of the island, whose jobs were to walk along the shore and survey the coastline for shipwrecks and smaller boats in trouble, particularly struck a chord in him. The coast guards’ families would come and meet them in some of the small cabins on the coast, but it was otherwise a very solitary life. They spent most of their days with storms and rough ocean and rocky terrain, and it is their complex relationship that Matthew finds fascinating. As Matthew says, “I love reading about revolutionary people and events throughout history, especially those in New England. The Pilgrims’ first landing in Provincetown, the courage of deep sea fishermen, the bravery of the first U.S. Lifesaving Service, the founding of America’s first art colony, all the way up to modern day artists who have taken huge risks in totally different ways. These ideas all inspire me to keep working. All of these accomplishments and detriments were achieved by battling different elements.”

When he was young, Matthew was much more interested in drawing than in painting, and it is still in drawing where his comfort zone resides. As a sketch artist, he was obsessed with realism which led to his first forays in painting into concentrating on photorealism. His childhood schooling was what you might call restrictive. From an early age he was in Catholic school and in classes that didn’t understand his need for expression. He cultivated an attachment to Van Gogh, and the post-impressionists, but the nudes he mimicked were met with disapproval. It wasn’t until college, at the School of the Museum of Fine Arts, Boston, that he discovered new techniques and styles that opened up his own artistic view. While there, he had a drawing professor named Billy Flynn, who changed the course of his work, encouraging him not to focus on the model in the room during his drawing class, but what surrounded them. Matthew says, “ It was liberating to not be stuck on just a nude model, instead finding something within the room itself, the people within the room itself, and what accommodates you that day…[to] figure out why and what you want to do with it. No one had told me anything like that before.” Moving away from realism and even drawing, he became less figurative. Flynn taught him what seems to have become a lifelong mantra of, as he puts it, the “freedom to experiment, and do something wrong, and try again.”

In 2012, Matthew started experimenting with pouring the paint directly onto the canvas, which was a new process to him. As a consequence, the figurative faces in his work have taken on new forms. Now, they are lighthouses, towers, and obelisks, murky structures that only pure examination can bring to light. Fog at Long Point, in particular, he envisioned as a green light from a lighthouse blinking in the fog. The piece is vibrant but mysterious; you can see waves and soft shadows playing across the canvas, but there are evident lines and shapes that interrupt the entirely natural flow of the paint. Bursts of color come through with watery transparency, almost as if at that moment beads of liquid were released on the surface. Taken as a whole, the work appears like a colorful peninsula delicately poised out in a white sea. Talking about his objective when painting these pieces, Matthew says, “In my work, I welcome unnerving surprise as my art changes from day to day, along with the land, climate, and tide. The ebb and flow of ocean waters, the herrings’ annual migration, and the nesting of sea fowl are all lessons on life and art, as well as the pursuit of happiness. Each day brings a new seasonality and every instant is vulnerable to the design of sea and air, much like the dripping and drying of wet paint. The push and pull of the tide decides how a vast sandbar will appear from day to day, just as the push and pull of the universe decides what we are able to accomplish in art.”

Sparrow-Hawk is even more abstract, and has a decidedly playful bent. The juxtaposition of the bands of solid color ground the painting. The organic shapes here appear almost craggy, but contain brilliantly marbled movements. Although there is a similar pallet in Fog at Long Point, this work has a much wilder, fantastical effect that mixes natural color and invented pigment.

You can see the influence of Robert Motherwell’s lyrical abstraction cropping up in Matthew’s geometric colors, and even the parallel of Motherwell’s love for Cape Cod. Yet, Matthew’s style is entirely new, and entirely himself. While he draws bits and pieces of influence from the world around him, you can see a beautiful transparency in his love for color and for mixing almost earth-tone blues and greens with vibrant touches. His work adds spark, playfulness, and fascinating color and ambience to spaces. Although they are small in size, they flood a room with their inventiveness and imagination, vacillating from delicate and mysterious, to powerful and vivacious. 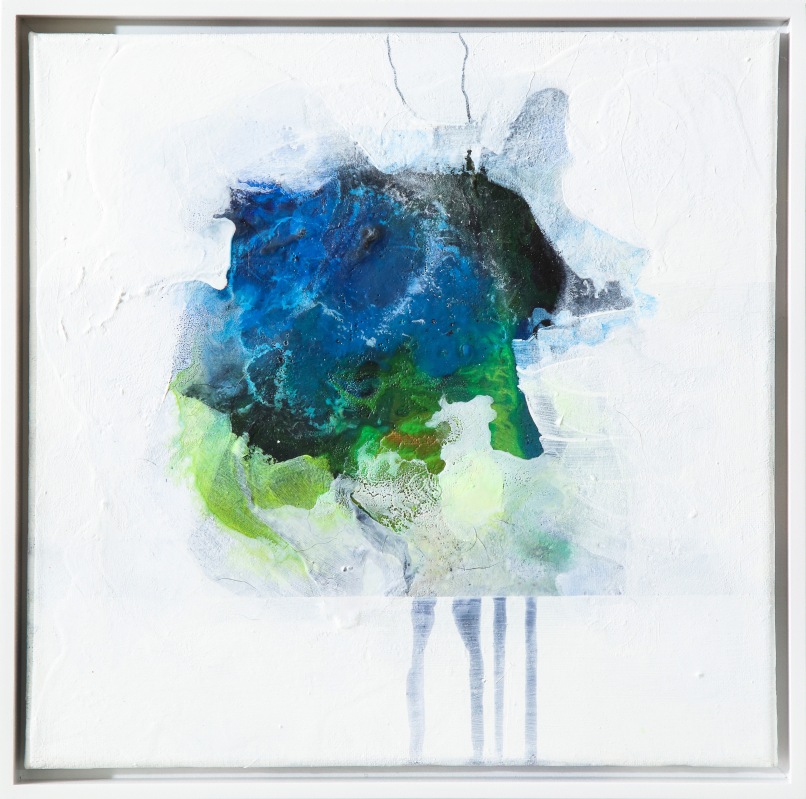 For more information about these paintings or to view these works in person at the New York Design Center, contact: info@bicyclefineart.com or call 347.405.8488.