Bicycle Fine Art artist, David Donovan Jensen is a painter, but he may be more accurately described as a sculptor of space. His environment seeps into the canvas, reflecting sounds, songs, moods, and the physicality of the outside world – diffused smoothly and soothingly within his work. Paintings, such as Snow Hymn, have a stillness that portray a quiet movement in them, a cool color that drifts in, calmly, like the first days of winter.

But David’s practice is anything but calm. In an artistic process that takes up every square inch of his surroundings, David begins on the floor where he lays his raw canvases flat on the ground. While horizontal, a series of acrylic washes are laid down. He uses a power sander to uncover the textures and undulations of the surface behind the canvases; a phase of the production that he himself equates to a massive leaf rubbing. You can see this effect in his piece Wave Hymn, which, if you didn’t know it was created on canvas, could be mistaken for a gorgeously worn cut of painted wood. At this point the piece has moved to a wall, another bit of floor, a different stretch of wall, and so on, until David feels the work is done.

Looking at works like Wave Hymn or Grey Hymn, you can see the difference in the surfaces that David used. Wave Hymn (aptly named by David who has likened himself to a surfer “lurking around for the perfect wave”) has broader strokes, the rises and falls are longer and thinner, with little divots hidden within the sweeping strides. Grey Hymn, on the other hand, is more decisively layered and dense, with knots tucked in, as though looking out on a densely populated horizon through a thick, mysterious fog.

“I’ve always been interested in work spaces and [with this new body of work] my paintings have started to look more like the space where the work was done. I feel that now I’m just recording these spaces where I work.”

Currently, the space that David is recording is an old-carriage-house-turned-studio in Northeast, Minneapolis. It was an art studio twice before (formerly occupied by artists of the Walker Museum) and before that, it was a carrier pigeon house –leading to a worn surface and rich creative space that feeds David’s work. 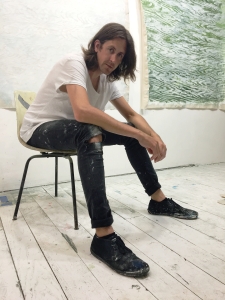 The Ocean Hymn paintings No. 1, 2, and 3, David’s newest series on paper, perhaps best bring to light, the original surface from which he draws inspiration. According to David, “the pattern comes up much faster” on paper and the movements across its surface are much more limited, dictated by the thinness of the material. The immediate relationship between the paint and the surface produces a notably intense difference in the blend and color. There are active divisions between the reds, blues, and pale greens in all three pieces, conveying a confidence on the part of the artist, who must make divisive decisions when handling the reactive materials. In a departure from his usual works on canvas, these paper paintings are slightly smaller in scale than the rest of his Hymn series –and the concentration in size allow him to play with powerful punches of color and texture. 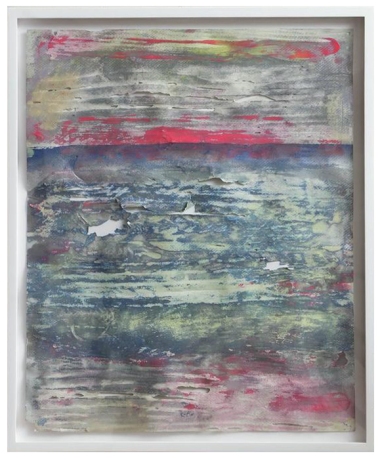 Beyond the physical space around him, music has also figured prominently in David Donovan Jensen’s paintings. For many years, he listened to very dark synth tunes, reflected in the somberness of his past work in both color and tone. He has recently moved away from this style, which marks a distinct uptick in the warm, light, and inviting colors he has introduced to his palette. One painting in particular that stands out, detailed with flecks of silver that bring a playful vibrancy to the whole canvas is All The Moons Are Your Moons. The size of the piece is impressive, and can stand both as a complex work of art and, with its placid tones, as a piece that warms any room that its hung.

Music influences David’s titling as well. While creating his newest body of work, the “Hymn” series, David had been listening to recordings of a Russian children’s choir on a phonograph. Listening led him to the question: “What does a hymn mean?” From there, his Hymn pieces took shape, where in each individual work, he is “singing out to one idea.” Focusing on the singular message in the odes, he transferred this sentiment to the canvas. With this whole collection, David feels that each pieces conveys “a hymn for a body, or a wave, or a snowfall.” They are each, by themselves, a study and celebration of a theme. In Body Hymn, for example, David examines the warmth of flesh-tones, producing a painting that almost breathes. Each piece in the series can stand on its own; like children in a choir, every one singing out their own unique, but harmonious song.

For a period of time, David moved away from painting and turned his attention to video work and making music videos. Being able to collaborate with performance artists such as Bon Iver, Colin Stetson, and Poliça, his artistic vision began to take place. A particular favorite of the projects he worked on was with fellow videographer, Isaac Gale. The pair wove together a somewhat abstract, loose narrative about aliens who had come to earth to collect bark and soil samples, and record an unknown natural world. His role as one of the videographers, was in essence, acting as a voyeur of this work. It was at this point he realized, “I was interested in doing the recording and I missed painting. I feel that I’m doing the recording now.”

When David first started working on video, he approached it as a way to create large-scale environments. Essentially, he would use the medium as a way to carve out a space and visually “cast” it through video documentation –an act very close to a sculptor’s practice. He created smoke sculptures in the forest at night for some of these projects. “I thought of it as building these huge spaces…that would then be suspended in the forest.”

This wrangling of spontaneous materials still figures in his process and work. There is a fluidity to the process that cannot be dictated. Nor does David want it to be either. Every time he does a wash or lays down a new coat, it’s a calculated risk. “You say to yourself ‘I may never get this back.’ You never really know exactly what to expect with each, very different, woodgrain cut.” This unpredictability in the process is the ideal apogee to David’s body of work that so strongly absorbs and represents the artist’s experience.

To view more images from this series contact: info@bicyclefineart.com